We continue our series as we now are on the 2nd pick and while this seems like an obvious choice, I think readers will be presently surprised by who will be suggested as the 2nd pick.

There is a fair assumption around the league that one of the big men will be picked with the 1st pick the draft and common practice is to simply draft whoever is left. If Towns goes number one, draft Okafor. If Okafor goes number one, draft Towns. While this happens a lot if many drafts where there are clear cut 1st and 2nd picks, I would shy away from just falling into that trap. That trap usually sets the team in the 2nd pick slot up for failure. Thus, I believe the Wolves should really think outside the box if they end up with the 2nd pick.

For your reference, since Durant was taken 2nd in 2007, the 2nd pick from 2008-2014 drafts have been Michael Beasley, Hasheem Thabeet, Evan Turner, Derrick Williams, Michael Kidd-Gilchrist, Victor Oladipo, and Jabari Parker, respectively. Outside of the last two which still are living off of their potential and rightfully so, the others are either fighting to be a starter or just to be in the NBA still. None of these guys have been All-Stars. Oladipo should have gone first in the draft by popular opinion. If that was true, Anthony Bennett would probably be in this group, where he belongs. Another popular number 2 pick is Darko Milicic who was taken before MANY Carmelo Anthony, Dwyane Wade, and Chris Bosh to name a few.

In the scenario Jahlil Okafor goes first, the second pick would be Karl Towns. At number two I believe Karl Towns is worth taking the risk on. He has the size and strength of DeMarcus Cousins. He has good touch for a big man. He also is incredible on the boards and on the defensive end. The scary thing about him is that he played on a stacked team and was a part of Coach Cal’s platoon system, that could have covered up his weaknesses due to his lack of playing time. I don’t think Karl Towns has Super Star potential, but can be an All-Star for a few years in the league if he continues to develop. Defense and Rebounding translate wonderfully to the NBA. While it may take time for Towns to be great on Defense, you can bet he will make a mark on the boards and blocks. The Wolves don’t need Towns to become a Superstar, just a defensive anchor.

In the scenario where Karl Towns goes number one, I would hesitate with Jahlil Okafor. There is a huge connection with Okafor as his agent is Bill Duffy, former Golden Gopher teammate of Flip Saunders. And we know quite well how Flip likes to keep things ‘in the family’ or a lot of his ‘Country Club’ moves. There is also a lot of talk that if the Wolves do get the number 1 pick, they would take Okafor. So they really like something about him. But my biggest concern is his inability to play defense. In the Western Conference, you play the likes of Anthony Davis, Dwight Howard, DeMarcus Cousins, LaMarcus Aldridge, Blake Griffin and DeAndre Jordan, and Tim Duncan four times each. Not to mention all of the penetrating point guards. This means interior defense and rim protection are necessities, not luxuries, if you want to become anything in the Western Conference. The front court of any of the remaining playoff teams in the West are great, not just good, defensively. Draymond Green paired with Andrew Bogut, DeAndre Jordan, and Dwight Howard. Thus, at 1 or 2, I would want to stay away from Jahlil Okafor. If Karl Towns is not available, I look elsewhere.

To me, there is one player that has the tools to be great in the NBA and I believe that id D’Angelo Russell. I spoke about him a bit in the previous post but at Number 2, D’Angelo Russell would be my pick as well. Only in the scenario where Towns goes 1 and Russell goes 2 would I take Okafor at 3. I do believe though Russell’s playmaking ability and his ability to rebound as a guard will make him a mismatch in years to come. He is essentially Ricky Rubio with a jump shot, and the passes are less flashy. Russell paired with Wiggins could be scary for a very long time in the league. While I would really prefer to draft a big man, I think the best player available should be taken here and it is definitely, D’Angelo Russell.

To everyone who thought this would be easy and you just take Okafor. All I can say is GOT EEEMMM! 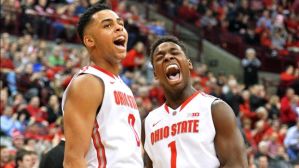