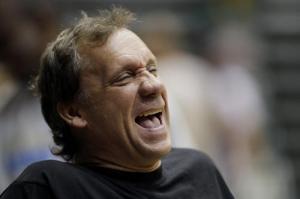 Nights like last night is when people earn titles like ‘The Great’ after their name, and that man is Flip. Now known as Flip The Great. The Timberwolves officially welcomed Karl-Anthony Towns as the number 1 pick in the 2015 NBA Draft, the first number 1 pick in franchise history. And while it was highly expected, the Wolves came out as winners by acquiring the 24th pick from the Cleveland Cavaliers in order to draft the hometown hero and reigning Final Four MVP Tyus Jones.

Towns landed in the lap of the Timberwolves on Thursday and avoided all the drama that occurred in the 2-4 range.  Towns fills many voids the Wolves currently have such as defensive rebounding, rim protection, pick & roll defense, shooting, and someone in the post that isn’t Pekovic. To add to that, Towns can pass the ball for a big man and will have a ton of targets on an athletic Wolves squad now. To add to that, Towns brings a much needed winning mentality that the Wolves culture desperately needs as they have the longest drought of any NBA team of not making the playoffs. It is crazy to think that KAT has only lost one game in the last year. The Timberwolves lost 65 more games than that.

And while most fans tuned out the rest of the first round, Flip Saunders moved the two second round picks to the Cleveland Cavaliers for the 24th pick to keep Tyus Jones home. Flip gets a pat on the back for this one. While I am not convinced Tyus will ever be a good NBA player, it is absolutely the best situation for him. The Wolves desperately need a consistent back up point guard that can step in immediately if Rubio gets hurt again. While I don’t think Jones fills that void completely, he will get his opportunity and think the LaVine experiment at point guard could couple into that. But Jones is a hero in Minnesota and it seems like Kevin Garnett loves the kid. He will be able to learn from one of the better true point guards in the league in Rubio. All this said, the situation is there for Tyus to grow. He has the ability to shoot and run an offense well. He is a very talented passer and takes care of the basketball. I don’t think he will ever be able to defend in the NBA, which will definitely be a problem. He is a solid addition to the Wolves, but I am not completely convinced he will make too much of an impact, at least not immediately.

Jones will have a chip on his shoulder to prove the other teams wrong that passed on him though. Jones was expected to go number 18 in the draft to the Rockets and play for Kevin McHale as they desperately need a point guard. Instead Jones fell to number 24 and watched guys like Terry Rozier (16), Jerian Grant (19), and Delon Wright (20) get picked before him, all point guards who were expected to go later in the first round/ early second round and after Jones would get picked. The Rockets passed on Jones much to the delight of Flip Saunders who was trying to trade up to the 18 spot to take Jones. Flip passed on the deal and the bluff that the Rockets wanted Tyus at 18 when the Rockets wanted Flip’s ‘first born’ in the trade. Many believe the Rockets were trying to trade for Ricky Rubio for the 18th pick, and thankfully that didn’t happen.

With many of the pieces set in place, you can feel the tables turning. You can feel the excitement again. You can watch the culture change in the organization from the laughing stock in the league to one of the brightest futures. The Wolves literally have the pieces in place to build a dynasty, and I am saying that with all my favoritism aside. Towns is going to be a very exciting player to watch and the hope is he can absorb everything he can from the likes of Kevin Garnett. The key will be his development now and logging minutes with Wiggins, LaVine, and Rubio. Having Towns alone gives the Wolves an A- grade at the minimum since almost any team that would’ve picked number one would’ve taken him. Adding Tyus Jones for the price that they got him at makes the grade an A. The Wolves did not have enough roster spots for the 31 and 36 picks and they didn’t just sell the picks off. They maximized the price of their picks and minimized the salary due to Tyus Jones. Here is to Flip the Great on what looks like his third straight good draft!

There was an error retrieving images from Instagram. An attempt will be remade in a few minutes.