Tyus Jones was sent to the D-league for assignment with the Idaho Stampede, affiliate of the Utah Jazz. Jones was sent down after appearing in two games for the Wolves in limited minutes. The hometown hero had some nice numbers in a couple games in the preseason and was okay in the NBA Summer League but there is a lot of work to be done for the Duke star. Jones is physically not ready to compete at the NBA-level. The 19-year old also is just not at a level where he can defend anyone in the NBA.

Jones’ first game went well. Although the Stampede lost, Jones put up 27 points, 8 assists, 6 rebounds, and only 2 turnovers. Its what you expect from a first-round pick in the NBA. But the drop off talent is huge from the NBA to the D-league, and probably a drop from Tyus’ ACC competition from last season. But Jones gets to work with some interesting players on the Idaho Stampede. The best player on the Stampede seems to be Jeff Ayres, an NBA veteran who spent the last two seasons with the Spurs. The Stampede also has Phil Pressey, who was recently cut by the 76ers, and Utah Jazz assignee, rookie Tibor Pliess. Pliess was the first pick of the second round in the 2010 draft and currently has a place on the Jazz roster.

Tyus Jones has a special place in many Minnesotans’ hearts. Someone who can beat Wisconsin for a National Championship and be from Minnesota is an instant legend. But when Jones was drafted, there were still a lot of questions about his game translating to the NBA. He was taken at 24, where he has lesser expectations but still expected to become a solid pro. The Wolves played against the Lakers where Larry Nance Jr, drafted a few spots after Jones, started. It isn’t saying much since it is the Lakers, but just worth noting.

Jones going to the D-league can absolutely be a blessing and is absolutely necessary given the Wolves situation currently. The last Timberwolf to be sent to the D-league was Shabazz Muhammed, who dominated while he was there indicating that he deserved playing time. He then received the playing time he deserved last season before getting hurt and missing the remainder of the season. But Shabazz is a fringe starter (or at least should be) in his third year and is still considered a valuable asset, being that teams are inquiring about him and the Wolves don’t want to trade him.

Tyus has a good amount to work on. First, he simply needs experience and to master his craft. Its scary to think that a player can go from being a freshmen starter at Duke to barely playing the year after. Being that Jones is 19, it would be the equivalent of a super smart kid dropping out of school for a year and then expected to pick it up again later. It’s probably the first time Jones hasn’t been one of the best players on his team, let alone being the worst. Getting clock and not forgetting how to play the game is important just to not simply fall off. This is more reason why the Wolves need their own affiliate so they don’t need to wait for a team to accept their players and can continue their development with their own coaches. It helps that Wolves GM Milt Newton is friends with Dean Cooper, the coach of the Stampede.

Next Tyus really needs to work on his defense. His defense is what is preventing him from getting any playing time in the league. Players are just faster and stronger at this point. If he wants to be on the court, he needs to be able to stay in front of another backup point guard. The key here is just to not become a liability on the defensive end. Just hold your own. Tyus has to work on his strength, speed, and just understanding the angles that need to be played to ensure that his guy doesn’t blow past him without any time for a help defender to get there to protect the rim.

For Tyus’ future, Jones will have to be able to shoot. The Wolves need 3-point shooting desperately and to be relevant in the NBA as a point guard, you need to be able to shoot. Just as Ricky Rubio. To Tyus’ credit, he has shown that he can shoot a bit. But for Tyus to really have a long-term career in the NBA, he needs to be a lethal shooter from 3. I am always reminded of Wes Mathews story of making it int he NBA as a 2nd-Round pick. He essentially was told; if you want to make the team you have to be a great shooter. He learned how to shoot and now is an overpaid player coming off of a major injury. But shooters will get overpaid and have a place in the league. That is a success story. If Tyus Jones can knock down an open three consistently, he will find his way into games.

Lastly, Jones will need to learn how to facilitate an offense. This is a strength of his. He is a smart player on the court and is capable of finding the open man. He just needs to be able to do this at a professional level. If he can learn to take what the coach tells him and translate it onto the court, he will be a favorite of his coach and will get playing time. Just hope that coach isn’t Sam Mitchell.

The Timberwolves need Tyus Jones to develop. One of the biggest holes on the team is the backup point guard. The Wolves need a backup point guard desperately for a couple of reasons. The biggest reason they need one is due to the uncertainty around Ricky Rubio’s jump shot and health. When Rubio is playing, things are good for the Wolves. But what happens if he isn’t playing? Rubio is officially a guy who can’t go 40 minutes and probably not 82 games. Having a backup capable of starting in his place is essential. The Wolves don’t have that currently.

The Wolves need to address a reserve point guard soon. The hope is Jones develops fast enough to fill that void before they go out and find a new one. If Jones can become a 3&D facilitating point guard, he will have a long career in the league. If Jones can develop into this, he will be able to provide support at the point guard position and push LaVine to his natural position, two things that are much needed for the Wolves. 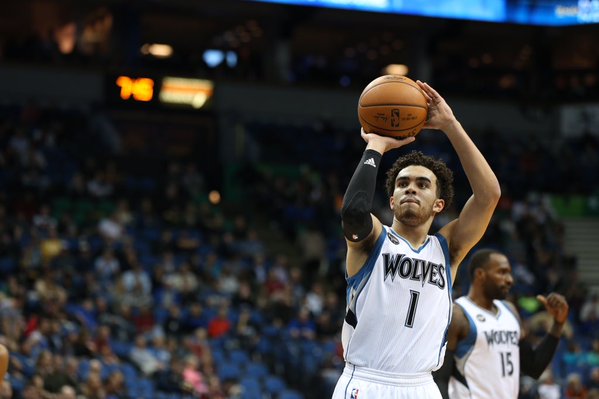