In a continuous journey to pay a visit to every NBA arena, there is the occasional low hanging fruit. Milwaukee isn’t far. I’ve also only been to Milwaukee a handful of times. But I finally got a chance to visit the Bradley center.

There are also the special occasions in which I can be the annoying fan cheering on my favorite team on the road. You cheer when no one else is cheering and you remain quiet when the crowd goes wild. You also get the pleasure of acknowledging your fellow wolves fans scattered around the arena with a head nod that translates to, “respect”.

Anyways, I always made it a point to only visit the Bradley Center if the Wolves were playing. And if finally happened. My wife and I drove out for 5 hours straight just to get crushed by the Bucks. If you’ve been following the blog, you may have seen this bucket list post about the NBA arenas that I have been. I also had the chance to visit the Verizon Center. As I visit more, I will categorize these together as ‘NBA Arena Visits’

The theme was 90’s night which was part of the Bucks’ flashback Friday campaign. I thought it was brilliant. It would’ve helped if the Bucks wore throwbacks to go with it, but everything else was nostalgic for any late 80’s baby. Kel was the in-arena host, they played double dare at half time, every player was associated with a 90s movie, and even Warren G performed a couple times. From a sports marketing perspective, it was lively and fun. The crowd was into it. I also got to wear my Wolves throwback jacket which was fitting for the theme. 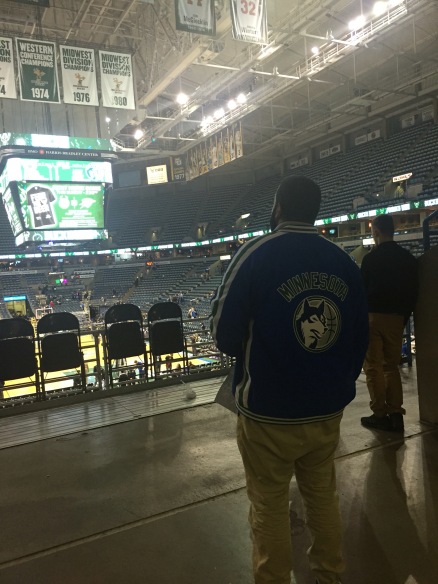 Apart from the in-game experience, the fans were much different than what I encountered when cheering on the Wolves in Boston. Most people were really nice. A couple fans would ask me questions about the wolves. When the wolves got within 7 points in the 4th, I was being annoying. So when the Bucks pulled back away with the lead, one guy said something that I didn’t make out. It seemed like he was angry. But then he came and talked to me after the game and hoped I would enjoy Milwaukee.

Then to the game. It was crazy to see Towns score the first 11 points for the Wolves. But it was typical Towns fashion I thought, score a bunch right away and then spread it out the rest of the game. And if you looked at the box score you’d think that’s what happened. But the game was a waste of a 5 hour drive (not really, I loved the experience). Towns, Wiggins, and Rubio were benched early in the third quarter for the remainder of the game as a ‘message’ from Sam Mitchell.

Now, I get it. The Wolves defense was horrid. Hands would go up only after the shooter had completed his follow-through. There were times it was clear Middleton or Parker were going to shoot and Wiggins or Towns would just watch it happen. I get that. Sit them early in the third and send a message. But you have to eventually get them back in the game. It wasn’t over. The bench got the team into the game again but get your starters in at that point. Your bench is tired and can’t continue to compete at a high level.

Wiggins, Rubio, and Towns never got back into the game after they were taken out in the early 3rd. The funny thing was that LaVine would’ve been a casuality of this had he started the second half. LaVine got benched to start the second half but helped lead the charge back late in the 4th quarter.

I do not recall the Bucks’ biggest lead in the second half but it was well over 20. The Wolves got back within 7 after a three by Rudez. The bench showed good energy led by Shabazz and Zach but it wasn’t enough. Khris Middleton had his way with the Wolves. Greek Freak also was very impressive. It was crazy to see him run the point and be guarded by Rubio (lord help him) and then come back and guard Dieng or Towns in the first quarter. He is as versatile as they come. He nearly had another triple double after having one earlier this week. Jabari Parker and Plumlee were nice too.

As I mentioned on Twitter, this seemed like the beginning of the end for Sam Mitchell. I can’t imagine the starters playing their hardest for him anymore or vouching for him to be the coach next season.

Overall, a wonderful experience even though it was a loss. The Bucks have an exciting team once they figure it out. And I am 1/3 of the way to visiting every NBA arena. Visiting another next week. Which will it be? 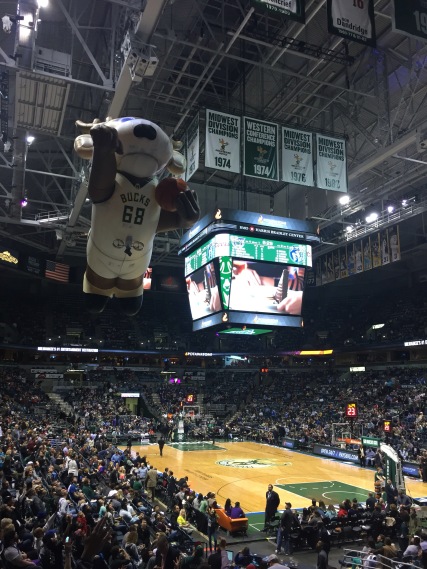