Skip to content
HomeJust How Lucky are the Wolves?

By the end of this, there will be a numerical probability of just how lucky the Wolves were to have this roster.

As we approach the NBA Draft Lottery, Wolves fans are enjoying the recent news of Karl-Anthony Towns winning the Rookie of the Year award Unanimously. There has been a lot of chatter about how lucky the Wolves have been over the last couple years to acquire two great young talents in Andrew Wiggins and Karl Towns. This chatter is warranted. The Wolves have had some historic things happen over the last two seasons, things that would attract a top-tier head coach like Tom Thibodeau to want to work in Minnesota. But just how lucky have the Wolves been?

The young core of the Wolves has accomplished some incredible things in the last two years. The Wolves flirted with being the first team in history to have three consecutive Number 1 picks on the same roster, until the Wolves released Anthony Bennett. Andrew Wiggins and Karl Towns are the first duo to win back-to-back Rookie of the Year awards on the same team since the Buffalo Braves in 1974. LaVine, Wiggins and Towns also set a record against the Cavs being the first trio of scorers under 21-years old to all score 20 points or more in a single game. The things the Wolves are accomplishing over time make you believe that it’s either fate or some serious luck.

The Wolves haven’t always been lucky. And when you’re constantly unlucky, the luck has to eventually turn into your favor. The Wolves have the longest active streak of not making the playoffs, which is up to 12 seasons. That is a lot of opportunities to get lucky and a lot of times ending up not lucky. The Wolves had never won the lottery in its 26-year history prior to last summer, which having the best odds twice. In those years the Wolves ended up with Christian Laettner and Derrick Williams instead of Shaquille O’Neal or Kyrie Irving. There is also the time in the 2009 draft where the Wolves drafted back-to-back point guards at the 5 and 6 spots just to have Stephen Curry be drafted 7th.

All that rebuilding talk aside, the 2016 Minnesota Timberwolves are in a lucky position. But just how lucky? Lets see…

Probabilities to factor in: 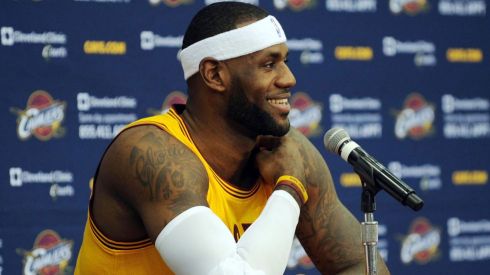 – First, it all begins with Lebron James. Lebron going to the Cavaliers in the summer of 2014 is what caused a domino effect of moves for the Wolves. If Lebron stayed in Miami, the Kevin Love trade may have never happened. If Love was not traded to the Cavs, chances are he would’ve been traded to the Warriors for a horrible deal around David Lee or left for nothing in free agency. According to fivethirtyeight.com the probability Lebron James kept his talents in Miami were 49.7%. After that, the Cavs had the best chances of bringing back the hometown hero with 15.8% chances. So the entire Wolves core doesn’t happen theoretically unless that 15.8% chance happens.

– The next thing that has to occur is that the Cavaliers have to win the draft lottery in order to have something to offer the Wolves for Kevin Love. The element of conspiracy theory occurs with the NBA draft here because the Cavs had a 1.7% chance to win the number 1 pick in the 2014 draft. Those chances are tiny! But it happened. And they took Andrew Wiggins with that trade.

– Next thing to factor in is Wiggins winning the Rookie of the Year award. The Wolves were lucky to get a talent like Andrew Wiggins to rebuild around. The truth is, he could’ve been a bust like Anthony Bennett the year before, so measuring just how significant of a talent Wiggins could be, the odds of him winning Rookie of the Year should be factored into the Wolves luck. Wiggins had odds of +600 to win the 2015 Rookie of the Year in July behind Jabari Parker, which converts to a probability of about 14.29% according to Sportsinsights.com

– The Wolves need their own luck with the Wolves winning the lottery. The Wolves were coming off of a serious rebuild in 2014-15 and came away with the worst record in the NBA. This gave the Wolves the best odds of winning the draft lottery in 2015 with a 25% chance. Compared to all of the other things that were factored into this probability, this was the most likely thing to happen. Like I stated earlier, the Wolves had never won the lottery up until this point. So to finally win it was huge.

– Towns winning the Rookie of the Year award. Unanimously too. Towns had a monumental season posting 18ppg, 10rpg and 54.2FG%. He was a joy to watch on both ends of the court. The Wolves got a franchise changing talent, which is highly unlikely. But in order to measure the Wolves luck, we simply looked at his odds of winning it in the preseason. He was not the favorite out of the gate. Towns ROY odds in August were +650, which is about 12.82% also according to sportsinsights.com. KAT was behind Jahlil Okafor at the beginning of the season as the favorite to win it.

Probabilities that were not factored in:

– The trade for Andrew Wiggins. While it would be nice to calculate what the probability was that the Love-Wiggins trade happened, its hard to put a numerical value on that. The Wolves swapping for talent isn’t really luck either. The Cavs just had to have the necessary talent to get Kevin Love.

– Getting Zach LaVine. Zach has been an integral part of the Wolves young core and getting him at the 13th pick over Adreian Payne was absolutely lucky. Unfortunately, the luck evened out by trading a future first-round pick for Payne.

– Picking other guys. There are the other draft picks the Wolves made like picking Towns over Okafor. Also there is the trading of Trey Burke for Shabazz and Gorgui, which was very lucky. These things were not factored in. The Wolves dodged bullets by making those selections, at this point in time at least. Things also evened out by not taking Giannis or Rudy Gobert with those picks in 2013. Thus, we just called it a draw.

– Landing Tom Thibodeau. The Wolves fortunes took a great turn for the better after the hiring of Thibs, at least on paper. Chances are, getting Thibodeau to coach here a year ago seemed like a long shot. But things fell into place and timing was everything. The Wolves were first-movers in the coaching carousel and landed the big fish. Money also talks in this game, so excluding those odds.

Boom. Call it luck. Call it fate. Call it the alignment of the stars. Whatever you call it, it is absolutely exciting.

Side Note: if the Wolves win the draft lottery tonight, the odds of 0.00123017% will be multiplied by 8.8%, which is a really small number. Just something to think about.

One thought on “Just How Lucky are the Wolves?”