The Timberwolves organization invited many Wolves and city influencers (us being the least influential) to Mayo Clinic Square for a Sneak Peak of the new City Edition Jersey for this season.

The night included a tour of the Timberwolves office, the Practice Facility, and of course a presentation about the new Minneapolis- St.Paul theme city jersey after signing some Non-Disclosures. Here is a look at the Jersey:

The Jersey is the new version of the popular Prince-themed Jersey from last season. The Prince-theme was honestly going to be VERY hard to follow up. But the meaning behind the theme here is what I felt they were trying to push. This jersey will be worn 9 times throughout the season. Five times it will be worn at home on Friday night games, with the exception of the final game of the season which falls on a Wednesday. This jersey will be the only alternative Jersey the Wolves have as they don’t have a throwback since there isn’t an anniversary for them to celebrate and didn’t make the playoffs so they don’t get an ‘Earned’ variation Jersey.

The jersey will headline a Twin Cities theme where the logo above will be on the belt of the shorts which is an outline of Minneapolis and Saint Paul. The theme will activate a lot of various local themes from being able to get merchandise from local designers, local food at home games, and viewing local artists’ work. The reason to focus on the Twin Cities is because the team is the only team representing two cities (this was mention but I think incorrect as Golden State represents SF and Oakland). 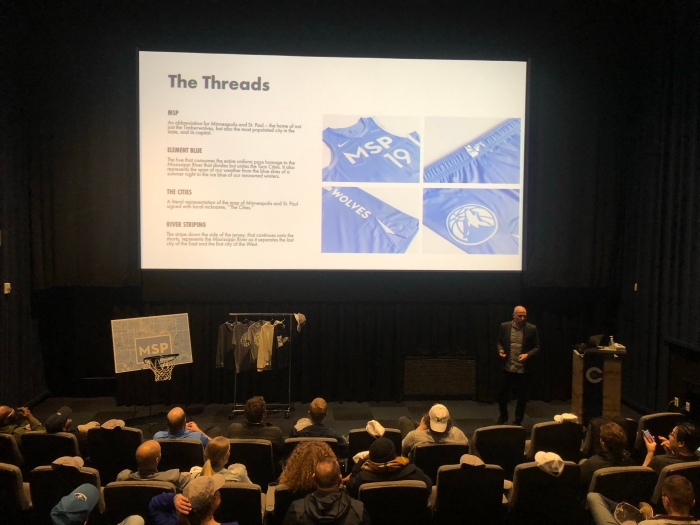 Overall, I like the color combo because it definitely has a Minneapolis Lakers vibe that every Wolves fan is a little upset that it was stolen by LA. The theme will certainly enable a lot of unique content around the color-scheme but also a variety around the ‘Cities’ logo that is on the belt. I love the simplicity as well. The one stripe actually makes it look good.

That said, following up the Prince theme was going to be very tough. I didn’t like the font that was used last season with ‘Wolves’ on the City or Earned editions. The ‘MSP’ font is clean and a rarely used abbreviation in the cities unless you’re flying through our beautiful airport. It will be interesting to see how the Twin Cities do embrace this theme as it is very locally focused.

I do wish that next year the Timberwolves trees are somehow introduced again. The trees on the jerseys during KG-era were iconic. If there is anything I would love to see in the future, it is working that back in.

Thank you to the Timberwolves organization for inviting us out. The Wolves are moving in the right direction in building a relationship with those that are invested in them. They also have a beautiful office and Practice facility. We also saw where RoCo got that European Waffle thing too in their kitchen.

Overall – Excited for the new Cities jersey and all the merch that will come with it!